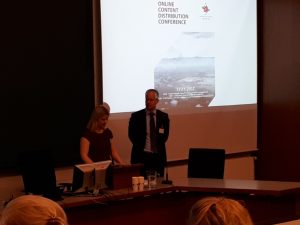 The conference was opened by Taina Pihlajarinne and Juha Vesala, both from the University of Helsinki, who have nicely summarized the aims and the content of the event.

Dinusha Mendis (Bournemouth University) provided a comprehensive insight into the copyright implications of 3D printing and the legal status of CAD files through two researches she led in the last two years. These researches focused on the platforms, the licences, the types and number of users, the number and categories of “things” (the unique items made available for downloading and printing), as well as the affected brands (iPhone/Apple products are the most important “things”). One of the conclusions of the researches is that the pirate 3D printing practices are not massive yet, and thus the researchers recommended the UK government to adopt the “wait and see approach” at this stage. As a part of the “Going for Gold Project” the research group provided support to actors of cultural and creative sector to open up new possibilities for the 3D printing market. Printing unique jewels is such a territory, where the protection of CAD files comes into question, including, whether the description of the printing process is an original work of expression, having a personal touch of the 3D printer (that is, is 3D printing manual or creative activity?); and whether “reverse-engineering” is acceptable in this field or not.

Valentina Moscon (Max Planck Institute) discussed the very topical question of the protection of press publishers under the Digital Single Market Strategy [Article 11 of COM(2016)593 final]. Moscon pointed to the fact that under COM(2016) 593 final press publications are “fixations” by their nature [ibid., Article 2(4)], and that press publishers deserve the protection for their organisational and financial contribution in producing the press publications [ibid., recital 32]. Based on these features of the newly proposed regime Moscon rightly concludes that the press publishers’ rights shall be discussed from a neighbouring rights perspective. Interestingly enough, this issue was already raised during the Conference of Stockholm (1967) to revise the Berne Union Convention. Moscon compared the contribution of press publishers to that of sound recording producers, and found that the latter must invest more in terms of time and costs into the production of the recordings. Indeed, she also highlighted that the press publishers’ right would hinder users’ rights to access information online. Therefore Moscon concluded that Article 11 needs to be removed from the DSMS, and a principled approach must be followed by the EC, as well as a more refined economic analysis of online content consumption is required before any provision like that is introduced on a European level.

Valerio Cosimo Romano (Cleary Gottlieb Steen & Hamilton LLP) introduced what content farming (not framing, guys!) is. There is no legal definition for it, but it might mean

“the business practice of generating and distributing large amounts of cheaply produced, low-quality mass contents on the internet in order to reach the broadest possible audience and monetize the resulting popularity.”

The business model is based on the creation and duplication of contents on a mass scale, the colonization of the search engine results and the diversion of the traffic to the farmer’s own websites. Romano stressed that the phenomenon involves various challenges that legislators might need to pay attention to: it is global, it is done on a mass scale, it has significant social consequences, high financial stakes are involved, and even its ethical nature is questionable. Nevertheless, as Romano noted, content farming has not received proper attention from legislators yet, although it might affect public law, IP law, antitrust law, labour law, criminal law, contract law, tort law as well as property law as well. Consequently Romano advocated for the defining of basic legal principles at an international level, the drafting and harmonizing national legislations, the effective enforcement of the existing legal doctrines as well as the pressing for self-regulation by the stakeholders.

Rosa Ballardini (University of Lapland) presented her work-in-progress paper on whether non-humans can be treated as inventors under patent law. The motto of the presentation was that predicting technology is very complicated. Nevertheless, the fate of artificial intelligence (as well as smart machines) is of significant importance (and not only from an IP perspective). Ballardini noted that as the economic value of the creations or innovations of AI has a growing importance there will be an interest in controlling these creations via intellectual property rights. The presenter discussed the legal provisions of the European Patent Convention, which is ambiguous with respect to the question discussed. E.g. a reference to the inventor’s name and address needs to be added to the application; nevertheless the EPC does not expressis verbis foreclose non-humans from the category of inventors. It is a matter of fact that inventorship tends towards an always greater reliance on computerized systems as well as AI, and therefore the rethinking of the IPR system might be unavoidable in the near future.

Taina Pihlajarinne (University of Helsinki) and Max Oker-Blom (Hanken School of Law) returned to the topic of 3D printing, but this time from a trademark perspective. The presentation started with a detailed introduction to the various aspects of trademark confusion. According to this pillar of trademark law, any use of an identical or similar sign that leads an average consumer to be misled about the origin of the goods or services shall be treated as infringing. The relevance of trademark confusion is of vital importance for 3D printing as well, as average consumers are certainly unaware that products they might purchase online are sold under the authorization of the original rightholder or not. The question arises whether trademark owners deserve any protection against such uses of 3D printed products. The presenters argued that there might be a need for an independent post-sale confusion doctrine in the EU trademark law.

Martti Kivistö (TEOSTO, the major copyright collective society of composers in Finland) provided an insight into the current – but totally shady – status of the copyright reform under the Digital Single Market Strategy, as well as the step-by-step development of the concept and the content of the copyright reform proposals of the DSMS. He then turned to the stakeholders’ view on and the criticism of Articles 11-13 of the proposals. As a conclusion, Kivistö opined that the reform proposal in nothing but a strange mix of facts, norms and policies.

Read the second part of the summary here.