Read the first part of the summary here.

Pekka Savola (Finnish Market Court) provided a great overview of the domestic implementation of the InfoSoc Directive’s norms on injunctions against intermediaries [especially Article 8(3) and recital 59]. Savola informatively introduced the Finnish legislation and case law (see Copyright Act 60c-60e), as well as the experiences of the United Kingdom (compare to Section 97A of the CDPA 1988) and of Sweden (Copyright Act Article 53b). Based on these – and many more non-presented – examples Savola concluded that there are three main groups of countries regarding the implementation of the EU law: some countries (like Finland) followed a detailed implementation approach, while others a general implementation approach (UK, Sweden, as well as the Netherlands and France). Finally, Germany and Austria serve as a great example for the third group of countries that have not implemented the EU norms clearly and directly (but still continue to use their formerly existing regimes). Consequently, these domestic norms show significant differences related to the specificity and conditions of the blocking order, the role of the alleged infringer in the procedure, the need to attempt measures more directly at the alleged infringer, as well as the distribution of costs of the procedure.

Katja Weckström (University of Eastern Finland) argued that in the hassle to tackle online infringements, the legislators overreact the importance of regulating technology, rather than leaving problems to be solved by the code. Based on this premise she focused on the topic of releasing personal information of file-sharers by internet service operators. The relevant questions of law are related to the concept of “significant infringement” and the right to effective injunctions with preventive effect. On the other hand, the questions of facts relevant in this field are related to the randomness of file-sharing swarms, the impossibility of regret, the origin of shared files, the ports of entry and the issue of connectivity. Katja recommended that file-sharing might be challenged by the disclosure of personal information solely of large scale distributors (seeders; although I might note that not all seeders are large scale distributors per se); targeting only the large scale infringers with injunctions; and imposing only reasonable compensation against them that is not based on the total/global effects of infringements.

Anette Alén-Savikko (University of Helsinki) started her presentation with the introduction of the netPVR system that is some form of IPTV services and allows the recording of television signals (including protected subject matter). Around two dozen netPVR services are currently used in Finland by approximately 240-270 thousand subscribers. However, the Finnish Copyright Act prohibits the reproduction of musical and cinematographic works by third parties on the commission of end users [see Finnish Copyright Act Article 12(2)-(3)]. Consequently, following a complicated legislation and negotiations of the different stakeholders, a new bill was introduced with the effect of June 1, 2015. This law (in compliance with Article 26 of the Finnish Copyright Act) allows for the extended collective rights management of rights related to and at the same time the use of netPVR. Alén-Savikko also discussed whether this approach as well as netPVR fits into (or at least it is allowed/not forbidden by) the EU legal framework. 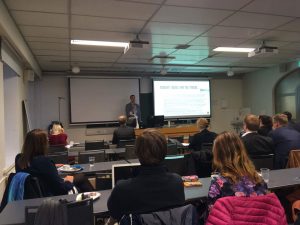 I continued the conference with my presentation on the research outcomes of my forthcoming book on (digital) exhaustion. I shortly introduced the origins of the doctrine of exhaustion and pointed to the fact that it has originally focused on tangible copies of works. Certainly, courts have faced the challenges of digital exhaustion in the last 10-15 years, among which proceedings the UsedSoft and the ReDigi cases are the most well-known ones. I collected those doctrinal and at the same time practical questions that need to be answered when it is about the future of exhaustion: the licence v. sale dichotomy, the transformation of making available to distribution, the migration of files as well as forward-and-delete technologies, finally the applicability of the doctrine on subject matter other than software. The effects of the introduction of a digital exhaustion doctrine would be tremendous for the rightholders, business operators and end-users as well. Not surprisingly, two main approaches have been crystallized in the last few years, among which the traditional positivist approach tries to resist the concept, while the constructive realist approach favours the introduction of the doctrine to the digital domain. I personally advocated for the latter in my forthcoming book (and on this conference, too).

Giuseppe Mazziotti (Trinity College Dublin) provided a thorough introduction to the development of the notion of Digital Single Market (that started in the era of the Barroso Commission and was further developed in the current Juncker Commission), and discussed unresolved questions like territoriality of copyright, the applicability of exhaustion on intangibles, the issue of geo-blocking. Mazziotti argued that the audiovisual sector is a very problematic field in this respect, especially as it serves culturally and linguistically diverse audiences through a fragmented licencing regime, leading to an existing territorial exclusivity yet. Further, in four of the five biggest markets in Europe (Germany, France, Italy and Spain) dubbing and subtitles are still indispensable. Mazziotti also questioned whether “passive sales”, that is, where a consumer buys a content package of a service provider in a country where the rightholder did not actively promote or advertise the service. Then he turned to the analysis of EU Regulation 2017/1128 and how it tries to solve the problems around the cross-border use of protected subject matter, as well as those challenges that arrive directly under the new Regulation (its limited effects, its effects on a possible unified copyright regime, the harmonization of copyright licenses etc.).

Björn Lundqvist (Juridicum Stockholm University) discussed the highly topical question of big data (including governmental data, user generate data and voluntary provided data) as well as its ecosystem, the Internet of Things, from a competition law perspective. An interesting feature of this big or large data is that its content is not protected by (intellectual) property, but accessing it is quite a complicated task. Admittedly, the sui generis database protection or trade secrets law can be applied to pieces of big data, but only in compliance with specific rules. What might be quite complicated is to connect the multiple collections of big data. Unsurprisingly, the European Commission noticed that interoperability as well as market-driven cooperative standard setting, as a “bottom-up” approach, is the key concept in this respect. Nevertheless, some regulations are available (especially the Public Sector Information Directive) for the sector that are called by Lundqvist “cool”, although other (like the eCall Regulation) seems to be outdated by now.

Finally, Olli Honkkila (University of Helsinki) discussed another challenging question, the net neutrality. Honkkila introduced the two-layer model, where end-users as well as content providers belong to the first layer, and where ISPs form the second layer. Net neutrality shall apply to this second layer only. He also stressed that the success of Internet is partially due to the equal treatment of information, a.k.a. the best effort delivery. The current EU legal framework that has a direct relevance on this field includes Regulation 2015/2120 (Telecoms Single Market Regulation) and the BEREC Guidelines [BoR (16) 127]. Honkkila introduced the aims of these norms (protecting end-users, guaranteeing innovation in the Internet ecosystem and avoiding fragmentation) and the most important provisions of them (compare especially to Article 3 of the TSM Regulation). The practical functioning of these norms were also thoroughly analysed through the commercial practices of the Swedish Telia (provider of mobile internet services), and the BEREC Guidelines.

The fantastic conference was concluded by Taina Pihlajarinne and Juha Vesala, who highlighted the diversity but coherence of the topics of the event, and expressed their hope that the book on the conference presentations will be also successfully completed next year, where the discussion of the topics will be possible yet.

All presentations are available via the following link.