I had the privilege to join a great symposium on moral rights on October 18, 2019. The event was hosted by the Rodin Museum in Paris, and it was organized by the staff of the museum and Professor Mira T. Sundara Rajan.

The event provided a comprehensive overview of both general and recent (let’s say, mainly digital) perspectives of moral rights. The presentations covered both common law and European approaches, digital copyright challenges, and various practical concerns (of both lawyers and art professionals). The presentations as a whole culminated in a massive source of comparative data and knowledge on this field. It was a privilege to be a part of this event. 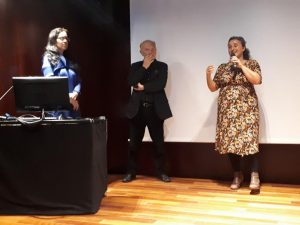 Speakers of the first panel

The conference was opened by the kind opening words of the director of the Rodin Museum, Catherine Chevillot, and was followed by a quick introduction of the daily long program’s schedule by the chief organizer, Professor Sundara Rajan. The first panel then continued with the overview of the moral rights approach of the European Union: the very limited legislation and the more important, still indirect case law on this field by Professor Michel Walter. The presentation further introduced various approaches to questions related to the destruction of the piece of art, as well as the relevant norms and case law related to photographs. Professor Valérie-Laure Benabou continued this analysis with her focus on the leading case law of the European Court of Justice (from the Phil Collins ruling through Deckmyn and Soulier & Doke to the recent copyright trilogy), and their contribution to a partial acceptance of moral rights in the European Union.

Following a short break, the second panel introduced the common law approaches to the protection of moral rights. Professor Mira T. Sundara Rajan has highlighted how these rights are treated under the rules and case law of the Canada, India, and the United Kingdom. (The UK was later discussed by other in great details yet.) Emily Lanza, Counsel of the US Copyright Office, has introduced the historic development of moral rights protection under the federal Copyright Act, as well as the leading case law (that, by the way, poses serious limitations on the otherwise very limited moral rights regime yet).

In the afternoon, we had three further panels. The first one after the lunchbreak was dedicated to digital copyright issues. I started the panel with my view on how artificial intelligence affects our recent “copyright industry”, and whether AI creations deserve copyright protection at all. I based by counterarguments on moral rights. (I believe both the concept of authorship and originality speaks against “AI-copyright”, but the conference did not require me to focus on these issues.) In his speech, Professor Giuseppe Mazziotti has argued that the recently accepted Digital Single Market Directive might allow for (or require) a technology-based protection (enforcement) of moral rights.

In the second panel, Rudolf Leška, a Prague based attorney and adjunct professor, navigated us through the practical difficulties surrounding the contracting around moral rights, including issues related to e.g. waiver, jurisdiction, revocation of consent, damages, injunctions, insurance coverage. Finally, Professor Makeen Makeen – in his detailed and humorous presentation – has summarized the four key reasons why the number of moral rights related cases is law both in the United Kingdom and in Egypt. (And these reasons are cultural/social and legal, as well as substantive and procedural.) 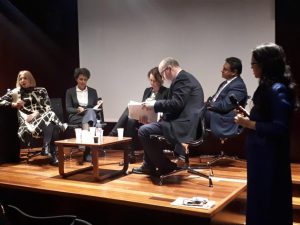 Panelists of the roundtable

The conference ended with a roundtable discussion of five distinct persons. Three of them were art professionals (curators, historians), namely, Catherine Bédard, Amélie Simier and Catherine Grenier, and two of them were practicing lawyers, namely, Aiyaz Alibhai and Simon Stokes. The five participants have summarized their practical experiences about moral rights challenges, and also reflected on the workshop’s subject, too, including 3D printing and artificial intelligence.

The event was not only extremely up-to-date, but it provided rich and practical knowledge on this field. I am certain that the audience that included not only lawyers, but art professionals and students left the venue happily and loaded with a lot of food for the brain.

Update: all speeches can be listen to via this link.