Conference on Adaptation Strategies for Copyright in the 21st Century

The WIPO and the Hungarian branch of the ALAI (Magyar Szerzői Jogi Fórum Egyesület, MSZJF) organized a one-day conference on the modern challenges of copyright law – and at the same time celebrated Mihály Ficsor Sr.’s 80th birthday.

The event was opened by the chief of the local organizers, Pál Tomori (head of MSZJF), who welcomed the audience, and expressed his gratitude to the sponsors of the event (including, but not limited to WIPO, CISAC, Hungarian Intellectual Property Office, Artisjus etc.). He also asked Jane Ginsburg, the chair of the morning session, to officially launch the panel’s work. 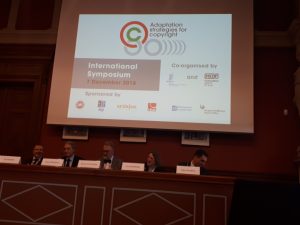 The first presenter was Michal Svantner (WIPO), who has highlighted the historic foundations of intellectual property protection in Hungary (that dates to the 19th century), and that Hungarians have also historically had a leading role in the administration of IP law. Mr. Svantner counted Mr. Ficsor among those important persons due to his significant achievements in the WIPO. Viktor Luszcz (Hungarian Intellectual Property Office) continued the panel’s work with a summary of HIPO’s official tasks, copyrights macroeconomic role and with a glimpse on the most important Hungarian success stories in the field of copyright law (like Prezi, UStream, AIMotives etc.). Pierre Sirinelli (Sorbonne) has introduced the technological aspects of web 2.0, and he translated these features to the language of copyright law and e-commerce law. The presentation has mainly been devoted to the question, what steps need to be taken against the platforms, that have lost their passive nature and have become active facilitators on online media consumption. In fact, Professor Sirinelli has discussed the forthcoming reforms under the Digital Single Market Strategy, especially Article 13’s probable consequences. Following a short brake, but still as a part of the morning session, András Szinger (Artisjus) has provided his straightforward thoughts regarding the solution of the value-gap: rather than over-regulation that might lead to under-consumption a new platform communication remuneration (PCR) should be accepted. The model is based on the general concept of private copying remuneration; and escapes the significant burdens of administrating the individual licensing in the digital age. 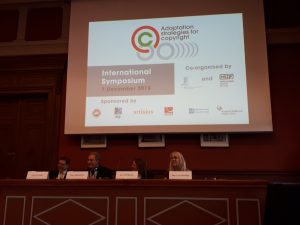 After a pleasant lunch break the afternoon session – chaired by Professor Sirinelli – continued with further notable presentations on the past, present and future of copyright law. Professor Jane Ginsburg (Columbia University) has introduced the origins of the umbrella solution (in fact, created by Mr. Ficsor), and discussed how this concept might apply in the EU, USA and Canada. Furthermore, the example of hyperlinks was used to show what the limits of this concept might be (from CJEU’s Svensson ruling to the server test doctrine in the USA). Professor Ginsburg was followed by Professor Silke von Lewinski (Max Planck Institute and University of Zagreb), who has introduced the status quo of image search engines, including their business model and the legal environment they are working in. She further discussed whether the proposed DSM reform would solve the value gap program generated by these service providers. As a part of that, she has proposed some changes to the text of the proposal how to strengthen the dogmatic of image search engines’ liability. Jukka Liedes (Finnish Copyright Society) has introduced the importance and key features of WIPO’s Guide to the economic analysis of copyright law, and how this guide was put into practice in Finland.

[The second half of the afternoon panel continued after another coffee break. Due to personal reasons I had to leave, so another blogger, Gergely Békés summarized – and I translated – the content of the last three presentations.]

Mitko Chatalbashev (CISAC) has introduced the importance of CISAC in the international exercise of copyrights of authors through collective rights management, as well as the most important successes of the organization in the 21st century. Benoit Machual (International Federation of Musicians) has stressed that the musicians’ (performers’) rights are regulated, but it does not shield them against the negative consequences of the recent changes in music consumption. He has argued that the DSM reform movement does not help musicians properly, the exercise of their rights is less effective than of the rights of authors. Their aim for the trialogue period is to lobby for a proper definition of “leading artist” in the DSM directive. Last, but not least, Paloma Lopez (AIE) has continued the arguments in favour of the performers, and she has also taken the position that performers shall be granted a remuneration right rather than keeping their exclusive rights, which are, however, extremely hard to exercise (and enforce) in the digital domain. Collective rights management of performers’ rights exist in a few European countries, but in most other countries they need to exercise their rights individually.