Copyright and human rights: a need for fair balance

The Institute of Comparative Law – with the support of the “Creating the Center of Excellence at the University of Szeged” TÁMOP research grant – organized a successful conference titled “Copyrightand Human Rights in the Information Age: Conflict or HarmoniousCo-existence” on February 25, 2012. I hope that the colorful presentations and the heated debate will remain in the memories of all participants for a long time.
According to the call for papers the basic concept of the conference was to talk about the connection and collision of and balance between copyrights and human rights. The 16 presenters definitely introduced how complex this issue is. 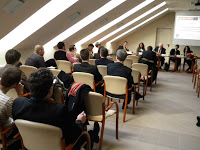 The first panel started with the keynote speech of Peter K. Yu from the Drake Law School (United States). He introduced the audience the basic tensions between the copyright law and human rights approach. Professor Yu was followed by two researchers of the Max Planck Institute (Germany), Yifat Nahmias and Nikita Malevannyy. Their presentation focused on the right to take part in cultural life. They presented their opinion, whether access to the Internet and access to copyrighted works are fundamental human rights or not? The former Assistant Director General of the WIPO, Mihály Ficsor, Sr. talked about the balance of copyright as human right with other human rights. He significantly emphasized the role of copyright protection for the creation of cultural goods and called all the anti-ACTA (and PIPA and SOPA) protests as “hysterio-liberal” activity. Finally, Krisztina Stump (Eötvös Lóránd Scientific University) delivered a presentation on the role of internet service providers as gatekeepers to find the right balance between free speech and copyright. 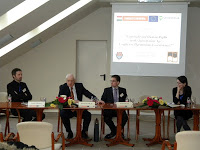 Anikó Grad-Gyenge (Károli Gáspár University of the Reformed Church in Hungary), the first panelist of the second section, concentrated on the law enforcement aspects of the issue and introduced us the importance of the SABAM decisions of the European Court of Justice. Bálint Halász from the Bird & Bird LLP analyzed the first of these SABAM decisions (Scarlet/Tiscali v. SABAM) in great details. Stefan Larsson, the legal sociologist of the Lund University (Sweden), emphasized that discussants of the copyright and human rights debate always have to keep in mind that the law may only work correctly if it is accepted by the society. If this is not the case, law will always remain on paper and will never become a “law in action”. Tuomas Mylly from the Turku Law School (Finland) regretfully had to skip the conference; however, he sent us his narrated power point presentation. It was quite funny to know that technology is on our side, too. 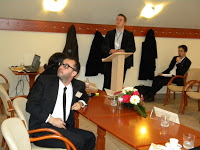 The third panel continued with a presentation of Christiana Maria Mauro (AK Vorrat, Berlin). Her paper (Rough Justice: Intermediary Liability Creating a New Posse in the Internet’s “Wild West”) focused on the intermediary liability, discussing the political relevances of the issue at the EU and international level. The three other panelists similarly concentrated on a special issue: filesharing. Enrico Bonadio (City College London, UK) introduced the development of filesharing services and the emergence of the argument of free speech protection for filesharers. Balázs Bodó (Budapest University of Technology and Economics) had a great introduction into the subculture of filesharers, including but not limited to the self-regulation of filesharers via the darknet torrent sites. Finally, György Kovács (Pázmány Péter Catholic University) concentrated on the (Hungarian and German) constitutional law aspects of filesharing. 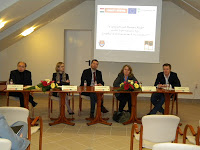 The final panel started with the presentation of Pál Tomori (director of the Association of the Arts Unions Bureau for the Protection of Performers´ Rights) on the importance and role of moral rights in a human rights discussion. Gabriella Ivacs (Chief Archivist of Open Society Archives) emphasized the importance of digitization of cultural goods by archives and libraries. She summarized what problems these institutions may face under the current copyright regime when fulfilling their culturally important task of preservation and dissemination. István Molnár (Regional Innovation Agency of the South Great Plain Region of Hungary) concentrated on the university-specific conflict of open access and IPR-centered management model. The final presenter of the conference was Eszter Bakos (University of Szeged), who discussed the meeting points of media literacy (that is what and how people study from the media) and copyright law.
It was a long day. We started at 9am and finished after 6pm. No matter, how tired I was after that, it was a great experience on my side. I am sure that the participants similarly share my opinion and I truly hope that we can have a similar conference in the near future. The best conclusion came from Bálint Halász in his presentation. He emphasized the need for a fair balance in this territory. I definitely share his opinion!
For more pictures, please visit this site.

One thought on “Copyright and human rights: a need for fair balance”